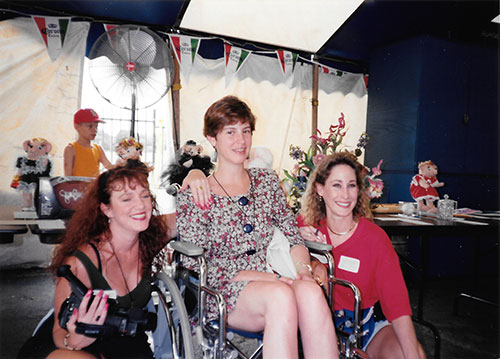 This is a story of remarkable courage in the face of a catastrophic brain injury. Susan was shot, almost execution-style, with a bullet leaving a blast deformity in the left occipital bone. During her initial operative procedure, she had extensive bleeding and was not expected to survive. In fact, as noted by her surgeons, “her chances of survival are felt to be nil.”

While she remembers the initial gunshot to her left shoulder, she had significant loss of memory after the second gunshot. In fact, her first memory was awakening in the intensive care two weeks after injury. However, for Susan, this was just the beginning of the long road to recovery. She remained in acute care for two weeks, followed by three months of outpatient neuro-rehabilitation and an additional three months in a post-acute brain injury program. Her story is one of many, we have heard, of “no hope” of survival to independence. It is unlikely on April 5. 1993, that anyone would have predicted she would be alive or even able to write her story of survival and recovery.

It may have been my early years of experience working with individuals recovering from traumatic head injuries that steered me toward clinical work—work that emphasizes the nature of identity and Self. The impact of traumatic brain injuries varies wildly from one person to another, but the challenges to the Self are universal. Following her shooting, Susan endured many of these challenges, beginning with one of the greatest losses for any human being, the loss of one’s sense of security in the world. While acknowledging and moving through multiple layers of grief is part of the emotional and spiritual recovery, naturally, the Self struggles with integrating these losses into a new life structure and one’s identity is hit hard. In over thirty years of clinical practice, I still consider my work with the rehabilitation population critically influential in understanding the subjective nature of identity and appreciating the potential for the reconstruction of the Self under the most demanding and often times debilitating circumstances.

There are many stories I have of my time with Susan, but one of the most memorable was the day she expressed her resentment toward me for living my life untouched by the problems she was wrestling with. Susan shared that she would watch me leave from work some afternoons, hopping in my car, carefree, and apparently happy. Some days she watched as I and some of my colleagues got in our shared cars to go have dinner, laughing and smiling as we left her world and went into ours. Along with other lessons, Susan taught me to remain sensitive to the disparate worlds between caregiver and client in that setting. She also taught me to not lose sight of the “other selves” that exist within clients as they are both recovering and grieving lost paths while recreating new ones. She showed remarkable courage and tenacity as she fought for her voice in our relationship and in her recovery.